Last night, starting at at 1:00 in the morning, my time, was the Nebula Awards ceremony, held by the SFWA, the Science Fiction and Fantasy Writers of America. The first award they gave out was the Ray Bradbury Award for Outstanding Dramatic Presentation, and it meant the world that it went to episode 3 of Good Omens, "Hard Times".

Exactly one year ago, Good Omens was released to the world, on Amazon's Prime Video service. Thirty years ago this month, Good Omens was published as a novel. It seems amazing that it still has so much life, and still feels so relevant to people's own lives. Especially now.

Here's the complete list of all the nominees and of the awards given out at the Nebulas last night. Congratulations to everyone nominated!

The entire proceedings existed in virtual space, via the magic of Zoom and other technological things.
This is what it looked like on my screen, just before we went live... 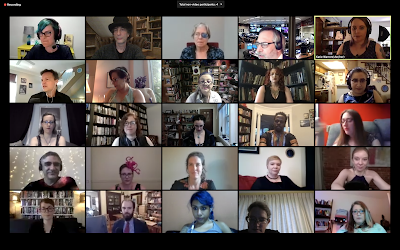 Here is the speech I gave. I wore a hat, because, even though Terry Pratchett loved pointing out that he was a hat person and I wasn't, not really, I thought it would have amused him.

I didn't intend to write the television adaptation of Good Omens. I did it because as he knew his own immeasurable light was dimming, Terry Pratchett wrote to me, telling me I had to do it. That no-one else had the passion for the “old girl” that the two of us had. And I was the one of us who had to make it happen, so he could see it before the lights went out.
I'm used to dealing with the problems of fictional people.  Now I found myself dealing with much harder problems, of real people and immutable budgets.  But I was even more determined to make something Terry would have been proud of. And I was part of an amazing team – Douglas Mackinnon, our director, Rob Wilkins, Chris Sussman and Simon Winstone and the folk from BBC Studios, the Amazon Studios team, and above us all the cast and the crew, who united and went over and above what anyone asked of them to tell, together, a kind of love story about protecting the world, about an angel who isn't as angelic as he ought to be, and a demon who likes people. And for them, I want to thank Michael Sheen and David Tennant.
Terry and I had written a book about averting the end of the world, about the power of not going to war, about an armageddon that didn't have to happen.
When I was a boy, I was told that there was a curse, “May you live in interesting times”. And that made me sad, because I wanted to live in interesting times. I thought I did.
And now, we are all of us living in Interesting Times. The Horsepeople are riding out, as they have ridden so many times before, and the world still needs saving – from plague, from racism, from foolishness and selfishness and pain. It says in Good Omens that we have to save ourselves, because nobody else is going to sort it out for us. And we do.
It feels almost indecent to be accepting an award while so many people are hurting, but thank you, from me and from Douglas, who took the words and made them so brilliantly come to life. This is for Terry Pratchett.
You can watch the whole ceremony at:
https://www.facebook.com/SFWA.org/videos/996082517476423/
and at a YouTube link I won't put up until the BBC/Amazon algorithm bots play nice and let it be seen with a Good Omens clip in it.
(The Good Omens bit starts around 22:30)
Read the whole story 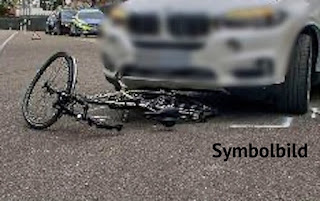