It took decades after the passage of America's landmark antitrust laws – the Sherman Act and the Clayton Act – for trustbusting to occur in earnest, and what spurred the action wasn't mere corporate bullying, not just price hikes and labor abuses.

What tipped America over into a state where a leader (FDR) who told activists "I want to do it, now make me do it" found the political will to "do it" was the corruption that attended the extreme concentration of wealth.

Monopoly was never merely an issue of economics – it's fundamentally an issue about politics. Yes, the monopolist bleeds workers and suppliers, sucks them dry and amasses a tremendous fortune, but that's just accumulating ammunition.

What the monopolist does with that ammunition is far more consequential: when the powerful are small in number and command vast fortunes, they can come to a consensus about how to deploy their fortunes to corrupt the political process.

The economic harms are just a warmup, the political harms are the real deal.

Hoover was beholden to plutes, had a cabinet full of them, turned over the nation's treasury to a sociopathic monster called Andrew Mellon whose stated ambition was to own all the world's aluminum.

And so, as the Depression raged, as the nation's breadbasket turned to dust and blew away, as the country disintegrated and as veterans of the Great War starved, Hoover continued to make policy on behalf of the 1%, immiserating the country.

FDR won the election in 1932 – but even more compellingly, Hoover lost it. The nation wasn't just angry about the economy – they were furious about politics, about the fiddling indifference of the rich and powerful to the collapse of their lives, fortunes and future.

The trustbusting tradition endured for generations, and it treated inequality, monopoly and wealth concentration as political problems, as the visible sign of an imminent takeover of the nation by self-styled neo-aristocrats whose wealth was evidence of greed, not ingenuity.

It was Ronald Reagan who made America's official position that wealth was virtue and virtue was wealth – the plute's circular logic that the system works if it elevates the best people, and that they, the elevated were therefore the best.

Reagan, his court sorcerer Robert Bork (a disgraced Nixon administration criminal) and the Chicago School of economists reframed monopoly as a purely economic matter, altering the rules so that monopolies were only prevented or punished if they made prices go up.

The "consumer welfare" version of antitrust abandoned all political questions – questions that every person had a legitimate say in – in favor of complex economic models that they alone could create and interpret.

Thus they could act as modern haruspices, who would evaluate every monopoly question by staring into the inscrutable guts of an equation and then pronounce that the gods approved of the monopoly.

The result was the steady encroachment of priorities of the wealthy into the political sphere, so that Boeing could self-certify its flying deathtraps, Purdue could lie about its murder pills, bailed out banks could robosign your house right out from under you.

When people embraced conspiracies about vaccines or aerospace companies or impunity for rich sexual predators, we blamed "online radicalization" for exposing the traumatized and desperate to false explanations for their misery – rather than blaming immiserating corruption.

Wealth is power, and it's unaccountable power that allows it to corrupt without check. That sounds abstract, so let me make it concrete by talking about the Epleys, a powerful and fearsome family that dominates New York State's Hamptons.

The Epleys were longtime allies of Southampton Mayor Michael Irving, who was trounced by Jesse Warren in a Jun 2019 election. Warren went on to remove Zach Epley from Southampton's planning board, as is his prerogative as mayor.

In October 2019, Epley left a voicemail message for Warren, telling the mayor that it was "game on."

After initial saber-rattling, the Epleys pledged to leave their new tenant Warren alone, but then Zach Epley lost a local Village Board election to a candidate that Warren had backed. Then the gloves came off.

Warren was also unable to renew his lease for his home in October, but New York State's eviction moratorium protects him.

Warren continued sending rent checks to the Epleys, but they claimed the certified letters never arrived – so they served him with eviction papers.

Eviction would end Warren's residency in Southampton and thus his eligibility to run again for mayor. On Jan 16, Zach Epley and his father Mark Epley (formerly the town mayor) showed up to demand that Warren leave in an absurd encounter that was recorded and posted online.

Warren has closed on a new home in town and will be moving at the end of the month.

On the one hand, this is a spicy story about small town politics, but on the other, it's a tale of how money becomes power becomes corruption.

A powerful family of sore losers can turn their wealth into the power to evict the mayor and thus expel him from town and end his political career in town – it's a perfect microcosm for how money can undo the democratic will of the people.

And that's why inequality is bad: not merely because the wealthy hoard the resources the rest of us need, nor because the alleged prosperity that allowing these soi-dissant giants direct our resources never materialized.

But because wealth is power without accountability, and that power corrupts.

The Epleys are why Reagan and Bork were wrong: wealth concentration was never solely (or even primarily) an economic matter.

It's always been political.

Podcast of Someone Comes to Town (permalink)

This week on my podcast: part 29 of my serialized reading of "Someone Comes to Town, Someone Leaves Town," my 2006 novel that Gene Wolfe called "a glorious book unlike any book you’ve ever read."

You can catch up on the other installments here:

Here's a direct link to the MP3 (hosting courtesy of the Internet Archive; they'll host your stuff for free, forever, too!):

This day in history (permalink)

#1yrago Warner claims ownership over the numbers 36 and 50, and demonetizes Youtube videos that incorporate them https://www.dexerto.com/entertainment/annemunition-bizarre-copyright-strike-youtube-random-numbers-1317750/

#1yrago The answer to the Clearview AI scandal is better privacy laws, not anti-scraping lawshttps://www.wired.com/story/clearview-ai-scraping-web/

This work licensed under a Creative Commons Attribution 4.0 license. That means you can use it any way you like, including commercially, provided that you attribute it to me, Cory Doctorow, and include a link to pluralistic.net.

Quotations and images are not included in this license; they are included either under a limitation or exception to copyright, or on the basis of a separate license. Please exercise caution.

How to get Pluralistic:

Blog (no ads, tracking, or data-collection):

Newsletter (no ads, tracking, or data-collection):

Mastodon (no ads, tracking, or data-collection):

RT @livefrombrexit: @mrjamesob @LanceForman As an MEP he voted for a regulatory border down the Irish Sea and now his own company isn't exp… by Live from Brexit (livefrombrexit)
Monday January 25th, 2021 at 1:01 PM

@mrjamesob @LanceForman As an MEP he voted for a regulatory border down the Irish Sea and now his own company isn't exporting neither to Northern Ireland nor the EU 🤷‍♂️ pic.twitter.com/coZq5ZmTmc 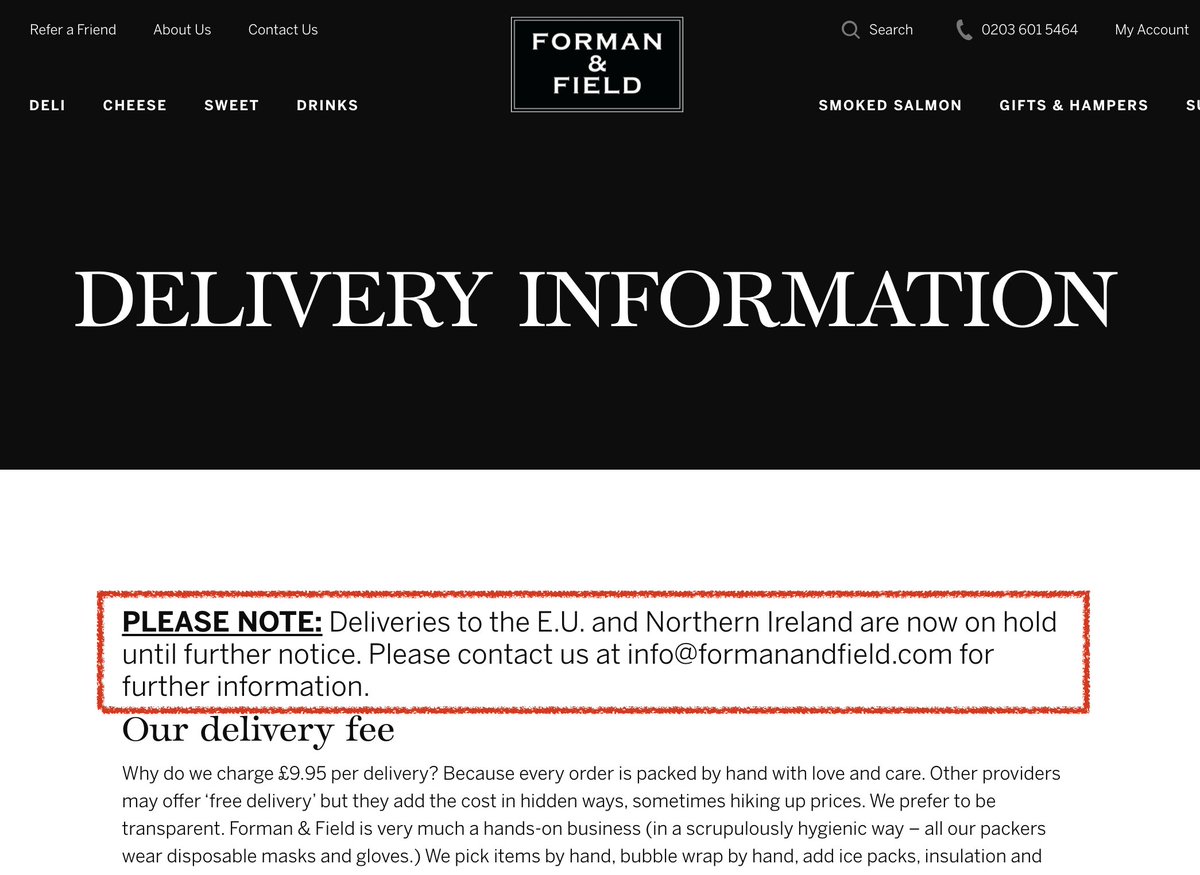